we are those neighbors 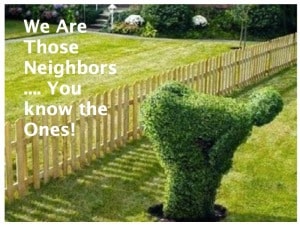 We recently moved to a house with a bigger back yard. As you know, if you have kids, this is well needed. I love my new backyard! I have to admit I let the kids go out in our backyard without me at times, of course while I am watching through the window. (Well, if I’m not napping. No really I AM KIDDING! Nap… what’s a nap?) It’s the only time I can ever get anything done, and of course they need to run off some steam. I have to admit, sometimes I just sit on my butt and watch them through the window. Mama needs some rest, don’t judge me!

I find myself going out there quite a lot saying things like, “Don’t pull on your brother, keep your hands to yourself, don’t get into the dirt unless you are going to take off your white pants.” You know, normal things like that, and all the while someone is always screaming! We live in a neighborhood that has houses that are close together. Our neighbors can hear everything that goes on in our backyard. They probably think I torture my kids at times, because of the screams that come out of our yard.

I’ve walked outside after hearing screams from Chip, only to find that Dale had ankled him and now he was waddling around with his pants around his ankles. I pulled them up and went inside only to hear a scream again, this time Dale, Chip had decided to return the favor, it was now a game! I pulled Dale’s pants up after chuckling a bit and walked back inside. This went on for quite a while and it was very comical from my seat.

Then I realized……….. We are those neighbors! I walked outside to screams again only to find the boys had stuck their heads, hands, arms, feet, etc., into the holes of the soccer net. After I pulled out all of the body parts I said (listen up real close so you catch this) “Boys don’t stick any more body parts in anymore holes!” Oh yes, the neighbors were outside too! Geez!

Don’t think my daughter doesn’t get into her fair share of mischief either. She is usually right in the middle of it and/or getting into her own mischief. She absolutely loves to play in the dirt and mud. Okay now, before you judge, I’m not one of those moms that doesn’t like her kids to get dirty. However, if you are going to get into the mud and dirt make sure you don’t have on your white pants! Before she goes outside I said “Take off your white pants before you get into the dirt.” Of course she says,”I won’t get into the dirt.” Well, the first mistake I made was believing her. I go out there ten minutes later only to find the once stark white pants, now brown and green. Really?! In ten minutes?!

Or how about the time, I came outside to see all of the kids in their diapers and undies. I asked what was going on and Minnie Mouse replied “Well mama, we all had on white so we just took off our clothes so we wouldn’t get dirty.” Well played Minnie, well-played! You are learning! So now I have streakers in my back yard!

You know since I never yell at my kids…the neighbors only hear a calm, cool and collected mother every time something goes wrong, hahahahaha! That one really made me laugh out loud! Hey, we are all human, life gets the best of us, we get irritated, we get tired, and our kids drive us crazy at times. Also, most of the time it plays out in front of other people. Why is that, anyway?! Oh well, who knows why, but it does. So, my neighbors probably think we are crazy because of my kids screaming like someone is murdering them, and I yell and say things that I can’t believe fly out of my mouth! That’s life in a nut shell! So, we are those neighbors…….. and I wouldn’t change a thing! Are you those neighbors too?

By the way…. you want to see those pants? The stains never came out……. No, I will spare you. I know one thing though, Minnie is going to learn how to use the washer and dryer very soon! So maybe she will think twice about wearing those white pants in the dirt. Probably not, but it’s worth a try right?!

Am I alone here? Or do y’all deal with the same stuff?

Happy Monday! As we walk into a new week, don’t

This chair is my favorite place to sit in my littl

Meow! Wear your favorite outfit and wear it well!

In life we are going to get rejected. We are going

I have a confession to make….. My husband and I

My response when Chris tells me that I have anothe